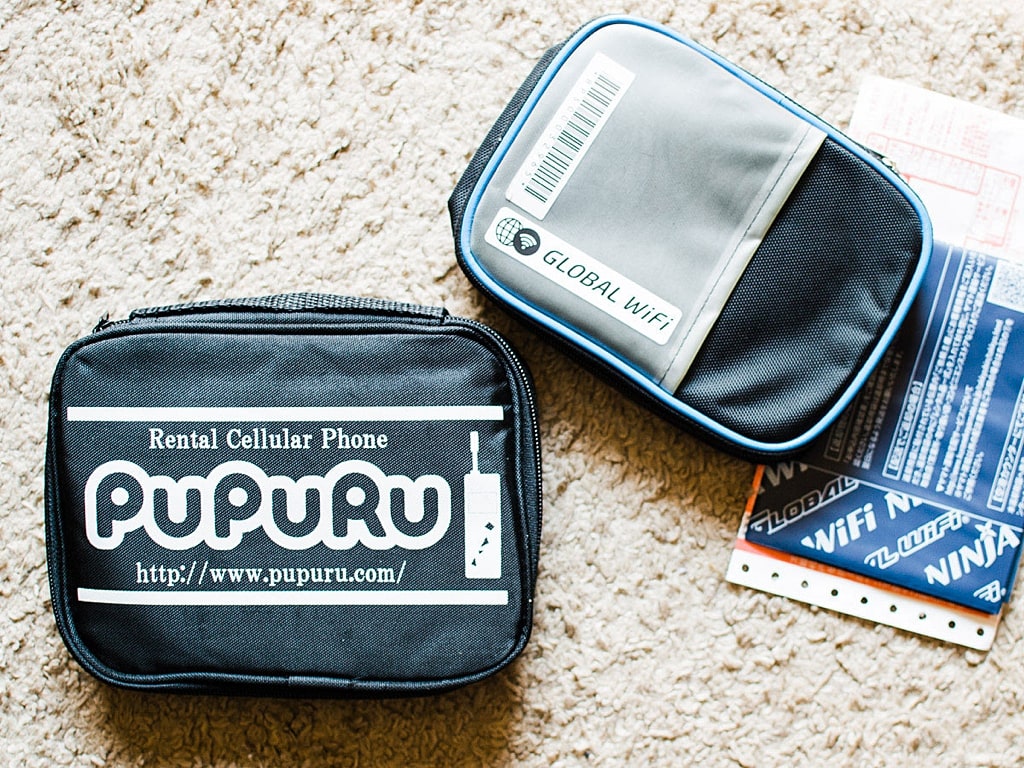 If you’re looking for the best pocket WiFi in Japan, then I have a secret to tell you. Based on what we’ve discovered, they’re ALL the same. Japan Wireless, Sushi WiFi, Fox WiFi, PuPuRu WiFi, Ninja WiFi, Global Advanced Communication, eConnect Japan, etc. — they are ALL from Softbank. Same speed, same features, same ISP (Softbank). Literally, the only difference is the price! So we’ve narrowed down the results to the three best-priced plans.

Japan has many wireless internet service providers (ISP) and the most popular are NTT DoCoMo, Softbank, and au by KDDI. These three are the local ISP giants and provide reliable internet connections throughout Japan.

From our experience, you should reserve your portable WiFi it at least 3 business days before your arrival in Japan. That way, it will be waiting for you at the airport or your hotel. It’s more expensive if you get it on your arrival at the airport kiosk, and there’s NO guarantee you’ll get one because they sell out, especially during peak seasons.

Here are some tips & advice our readers and clients have found helpful for first-time travel to Japan:

Relying on free and unsecured public hotspots poses security risks and it’s a hassle to find them while you’re trying to enjoy your time sightseeing. If you are staying at an Airbnb, their connection is not reliable. The previous occupants may have used up all the data; which happened to us every time. So having reliable internet access while traveling in Japan is important.

Data SIM card is cheap, but make sure your phone is unlocked and it’s compatible. SIM cards also don’t often allow you to tether to other devices such as laptops.

When ordering your pocket WiFi online, consider how you want it to be picked up and returned. Most rental companies have 3 convenient pickups and return options:

Airport and hotel pickups (recommended): Double-check the opening hours of the rental company’s kiosk at the airport and see if it aligns with your arrival time. If you’re arriving in Japan outside of the kiosk opening hours, then it’s best to choose the hotel delivery pickup option.

Office pick-up: You may encounter a rental company that has a physical office in major cities like Tokyo. You need to take note of their opening and closing hours and be at least familiar with how to get to their office. I don’t recommend this option because going to their office is going to be an additional cost for you.

Returning: If you through the airport on your departure date, you again need to check their operating hours. Or you can choose the post office box return option. In my experience, it’s more convenient to return the device through a post office box as they’re practically everywhere in Japan.

For example, my husband is a heavy internet user (super heavy). He will probably consume 2-3 GB a day just watching Youtube videos and uploading photos on our social media account. For a user like him, a pocket WiFi with at least 10-20GB of data throughout his stay won’t fail him. However, you may need to pay considerably more for that much data.

If you have kids who watch videos to entertain themselves while traveling in Japan, you’re also on the heavy user side. Plus, since you’re a family, you are probably sharing the connection through that device.

If you’re like me, who’s a casual user, who only looks at my phone to use Google Maps and navigate the train, or find an interesting restaurant to eat at, or read ebooks, then you don’t need super high GB data.